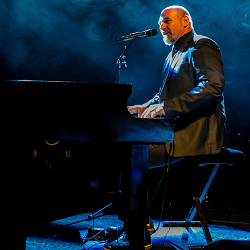 Billy Joel’s songs certainly need no introduction. They have fused with our collective memory. He is among the most successful artists in pop history, with more than 30 top-ten hits to his name.

His repertoire pretty much spans the entire pop spectrum: think of the classic sing-along number ‘The Piano Man’, but also swinging rock numbers such as ‘My Life’, beautiful ballads like ‘Honesty’ or good old Rock & Roll, like ‘Only the Good Die Young’. Each one of them probably has more impact live than on vinyl. And, although Billy is still performing at the age of 70, there is only a very slim chance that he will ever tour in Germany again. High time for a tribute, then.

Alexander & 003 In the past few years Alexander has developed into a sought-after, versatile pianist and keyboard player, and singer/entertainer. An impressive CV starts with the most prestigious piano bars and continues to Najib Amhali (PlusSupportAct), via De Corona’s, Twarres and many more, Alexander is a popular guest on stages both large and small throughout the land.

He has released 5 singles and a double live album with his band ‘003′ which showcase the band’s original work. This music has been enthusiastically received by many radio stations, and been given considerable airplay. After 5 years, the team thought it was time to strike out on a new adventure. The band members made a joint decision to tackle the oeuvre of Billy Joel. And the result?