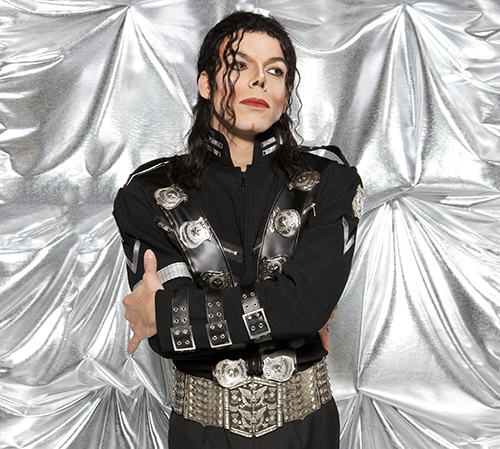 According to experts from the music industry and the national press, Christ’OF is without a doubt the most successful Michael Jackson Look & Sound Alikes in Europe.

Christ’OF, of Belgian descent, received his first MJ album “THRILLER” in 1982; this was the moment where it all began for him as an impersonator of his biggest idol. In 1989 Christ’OF started to work more in detail thanks to Bego, who would become his regular assistant for make up & hair and also his personal stylist.

Together they set up “The MJ Tribute Show” which played in the cabaret hall L’évenement in Brussels. Since that moment, Christ’OF has performed in many different countries such as France, Luxembourg, Belgium, Germany, the Netherlands, England, Slovenia, New York, Dominican Republic, Spain,…

Christ’OF also gave special performances such as: Release of the album ”Blood on the dance floor” at VIRGIN Megastore, Brussels. – Preview of the film GHOST at KINEPOLIS, Brussels – MJ Days in Belgium, the Netherlands, London and New York – Release of the album “Invincible” in Freiburg, Germany. In 2001 Christ’OF is awarded the title “EUROPEAN MJ SOUND & LOOK ALIKE” by SONY MUSIC. In the meantime he performed on various TV shows on: RTL – RTBF – VRT – VTM – VT4 – TF1 – FR3 – ARD – MTV – VH1…

Christ’OF also played a role in the Belgian film “Iedereen Beroemd”, which received an Oscar nomination!

The highlight of Christ’OF was without a doubt his performance before the King of Pop himself in Webster Hall in New York City in July 2002, after which he received the highest compliments of the maser hismself: “YOU MUST PRACTICE EVERY DAY TO BE SO GOOD”.

In 2010 Christ’OF wins the talent contest “My name is Michael”. (TV show of VTM and RTL4) which was looking for the best look & sound alike of “Michael Jackson” in Belgium & the Nederlands.

After this victory “Christ’OF” was able to accomplish a theatre production in Belgium and the Netherlands which was sold out 17 times. +/- 49.000 were able to enjoy this exciting show.

In 2011 Christ’OF started his own theatre show carrying the name: “MY VISION”.

Christ’OF performs live with different cast possibilities, from solo to 20 dancers, from an on tap show to an exciting live show with a complete crew of live musicians, backings and dancers. The show is called “LEGACY”.